This Black-Hole Collision Just Made Gravitational Waves Even More Interesting 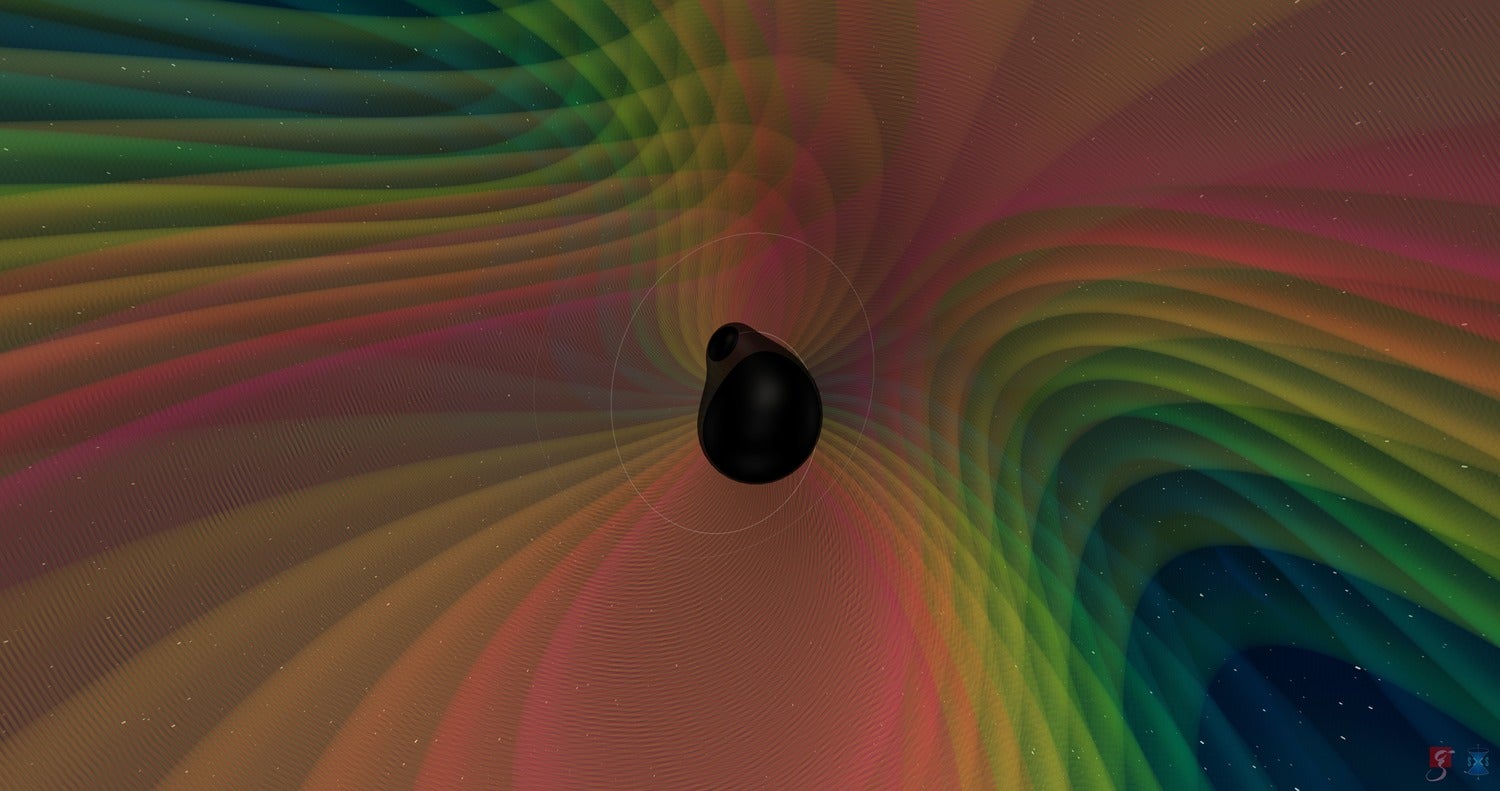 Gravitational-wave astronomers have for the first time detected a collision between two black holes of substantially different masses—opening up a new vista on astrophysics and on the physics of gravity. The event offers the first unmistakable evidence from these faint space-time ripples that at least one black hole was spinning before merging, giving astronomers rare insight into a key property of these these dark objects.

“It’s an exceptional event,” said Maya Fishbach, an astrophysicist at the University of Chicago in Illinois. Similar mergers on which data have been published all took place between black holes with roughly equal masses, so this new one dramatically upsets that pattern, she says. The collision was detected last year, and was unveiled on 18 April by Fishbach and her collaborators at a virtual meeting of the American Physical Society, held entirely online because of the coronavirus pandemic.

The Laser Interferometer Gravitational-Wave Observatory (LIGO)—a pair of twin detectors based in Hanford, Washington, and Livingston, Louisiana—and the Virgo observatory near Pisa, Italy, both detected the event, identified as GW190412, with high confidence on 12 April 2019. The LIGO–Virgo collaboration, which includes Fishbach, posted its findings on the arXiv preprint server.

LIGO made the first discovery of gravitational waves in September 2015, detecting the space-time ripples from two merging black holes. LIGO, later joined by Virgo, subsequently made ten more detections in two observing runs that ended in 2017: nine more black-hole mergers and one collision of two neutron stars, which helped to explain the origin of the Universe’s heavy chemical elements.

The third and most recent run started on 1 April 2019 and ended on 27 March 2020, with a month-long break in October. Greatly improved sensitivity enabled the network to accumulate around 50 more ‘candidate events’ at a rate of roughly one per week. Until now, the international collaboration had unveiled only one other event from this observation period—a second merger between two neutron stars, dubbed GW190425, that was revealed in January.

The latest event is unique. One of the two black holes that merged had an estimated mass of around 8 solar masses, and the other was more than 3 times larger, at 31 solar masses. This imbalance made the larger black hole distort the space around it, so the other’s trajectory deviated from a perfect spiral. This could be seen in the resulting gravitational waves, which were created as the objects spiralled into each other. All the other merger events that have been unveiled produced a wave that forms a similar ‘chirp’ shape—which increases in both intensity and frequency up to the moment of collision. But GW190412 was different: its intensity didn’t simply rise as in a chirp. “This makes this system very interesting, just looking at the morphology of the signal,” Fishbach said.

Physicists had eagerly awaited such ‘non-vanilla’ events because they provide new, more precise ways of testing Albert Einstein’s theory of gravity, the general theory of relativity. “We are in a new regime of testing general relativity,” said Maximiliano Isi at the Massachusetts Institution of Technology in Cambridge, another LIGO member who was presenting at the meeting.

In particular, researchers were able to use this data to discern the ‘spin’ of black holes. “We know with confidence that this heavier object had to be spinning,” said Isi. Previous events had left researchers baffled: observations of black holes in the Milky Way suggested that black holes should have high spins, but this did not show up in gravitational-wave data from the first two runs.

Astrophysicists hope that detecting spins can shed light on how the black holes formed and came to orbit each other. The richer information in asymmetrical mergers helps to measure an event’s distance from the Milky Way with better precision. Accumulating many such measurements could provide a new way to map the history of expansion of the Universe.

The LIGO–Virgo collaboration will continue to publish more results from its vast trove of unpublished data, including individual events that are particularly interesting or exciting, says Virgo’s Jo van den Brand, a physicist at the National Institute for Subatomic Physics in Amsterdam. “I think the harvest is quite good, let me put it like that.”

This article is reproduced with permission and was first published on April 20 2020.

What COVID-19 Reinfection Means for Vaccines

China Says It Will Stop Releasing CO2 within 40 Years