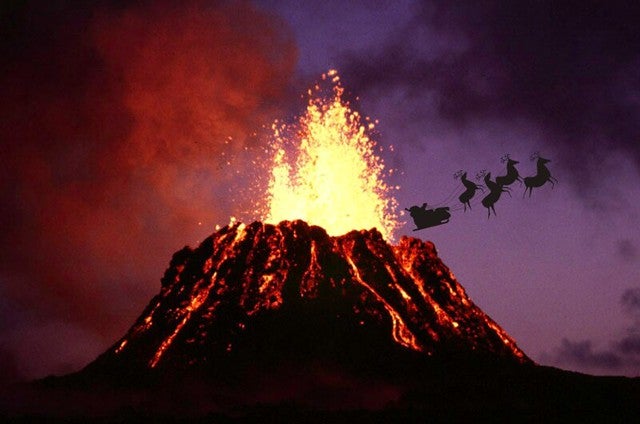 Need some rock-solid reading to make it through Christmas? Look no further!

Merry Christmas and Happy Holidays, everyone! It’s that day when the majority of things in many countries are closed, it’s freezing cold (or blazing hot, depending on where on the planet you’re at), and festivities will eventually wind down to the point of needing something to do. Especially if you’re on your phone hiding out in a bathroom or closet somewhere.

I’ve got you covered! And now you’ll have plenty of Christmas-themed geology topics to enliven flagging conversations with.

On the subject of coal, especially useful if some wit stuffed your stocking with it:

Yeah, geologists actually like getting coal in their stockings! It’s interesting stuff! I mean, c’mon, rocks that burn!

To celebrate, here are some beautiful pictures of coal taken from the interwebs. I’ll take coal rocks like these in my stocking any Christmas!

Rosetta Stones: Geologists Have an Incentive to Be Naughty

I never understood why getting a lump of coal instead of presents should be considered a threat. I’m a coal miner’s daughter (yes, really. Okay, so he was an engineer at a coal mine, but it counts). The best thing my dad ever gave me, aside from the pony and the playhouse and the Breyer Horse stable that I adored for nearly a decade, was a lump of coal.

Rosetta Stones: Where Does Santa Get His Coal?

You probably wouldn’t expect Santa to be able to locally source his coal – after all, it’s a rock that requires swampy or marshy areas with lots of lush plants. That’s not really what you find around the North Pole!


But a mere 650 miles away, halfway to Norway, you’ll find an island that provides all the coal Santa would ever need. It’s the glacier-capped island of Svalbard, and Santa wouldn’t even have had to go digging when he first went looking for coal. It was right in plain sight…

During my recent trip to Australia, I was able to pick a piece of coal off of the ground — something that I’ve never done before.

Rosetta Stones: Charcoal That Can Scratch Steel: the Wild World of Permineralization

We all know charcoal, right? Most of us have taken bits of it from the ashes of wood fires and played with it. It’s light, soft, and crumbly. It leaves a black sooty residue on everything it touches. It’s marvelous stuff for drawing, even though it’s prone to unintentional smudging. You can easily crush it to powder. Take a moment to imagine it. Score it with a fingernail. Remember how soft and delicate it is.

Now imagine taking a chunk of it from the ground, and seeing it blacken your fingers, but it’s heavy.

The Geological Society: In the bleak midwinter

Stonesfield slate – not a true slate in the geological sense, but a Middle Jurassic limestone facies present around the village of Stonesfield in Oxfordshire – graces the roofs of many vernacular buildings in NW Oxfordshire and covers the roofs of many of the Oxford Colleges. Production of the ‘slates’ began during the 17thC, when it was discovered that freshly dug blocks of this lens-shaped deposit of sandy limestone – extending roughly two miles from east to west and one mile from north to south – around the village of Stonesfield, could be easily split after exposure to frost.

To celebrate, here’s a very big Christmas rock– Christmas Island, which is located in the Indian Ocean south of Indonesia.


Rosetta Stones: What Do You Give the Country That Has Just About Everything?

Why, a mountain, of course!

Finland’s highest mountain is the fjeld of Halti. There’s just one problem: Halti’s summit is in Norway. That means the highest point of Finland’s tallest mountain doesn’t even belong to it! So some nice Norwegians are trying to give Finland the gift of a mountaintop for its independence centennial.

Norway has presented London with a Christmas tree every year since 1947, in gratitude for Britain’s support during World War II. This tree is famously displayed in Trafalgar Square throughout the festive season, but what lies beneath this well-known Christmas tree? It may not appear to be as dramatic as the Great Glen fault or as impressive as the Giants Causeway but the geology beneath Trafalgar Square and the rest of London can tell its very own Plate Tectonic Story spanning more than 430 million years. London’s geology reveals times of continental collision, folding, faulting, sea level fluctuations and climatic shifts from dry deserts, tropical seas, icy tundra and river flood plains.


Science Base Catalog: Geology and porphyry copper-type alteration-mineralization of igneous rocks at the Christmas Mine, Gila County, Arizona

Christmas is almost upon us and so at Four Degrees we decided to devote our next post in the ‘What’s Geology got to do with it?’ series to Christmas! Marion and I have selected varying aspects of the festive season from trees to biblical stories and common Christmas presents, and linked them to geology (some tenuous, some not so tenuous…). We hope you enjoy!

Welcome to the last Four Degrees post of 2013! I’m back home with family and here the Christmas festivities happen today, on Christmas eve. So before I focus my attention on wrapping my last present and stuffing the goose for our family meal, here is the second instalment of our Christmas special of ‘What’s Geology got to do with it’! What has geology got to do with the Three Wise Men, popular Christmas presents or Rudolph the reindeer? Find out here… and a very merry Christmas!

Highly Allochthonous: The 12 Geological Days Of Christmas: A Reprise

I thought new readers and old might enjoy my 12 geological days of Christmas series: conceived in a fit of bored madness as I rode a train to see my family last December, it not only proved to be quite a challenge to actually keep up the once-a-day posting schedule, but also a huge amount of fun. For me, anyway.

The words below are sung to the obvious tune, and (mostly) just about scans – although my festive gift to you is not to post anything resembling audio of me trying to sing it myself.

Rosetta Stones: Holiday Road Trip? Compelling Reasons to Stuff a Geologist in Your Car – But Do Your Own Driving

There’s nothing like roadtripping with geologists. If you’ve got a long, dull trip coming up, stuff a geologist or two in the car with you – it’ll liven things up considerably! Of course, you’ll find yourself taking risks you never expected to take, and pulling your car off the road at extremely short notice and sometimes awfully close to a sheer drop, but trust me, it’ll be worth it.


Have a safe, happy, and delightfully rocky holiday season, my darlings!