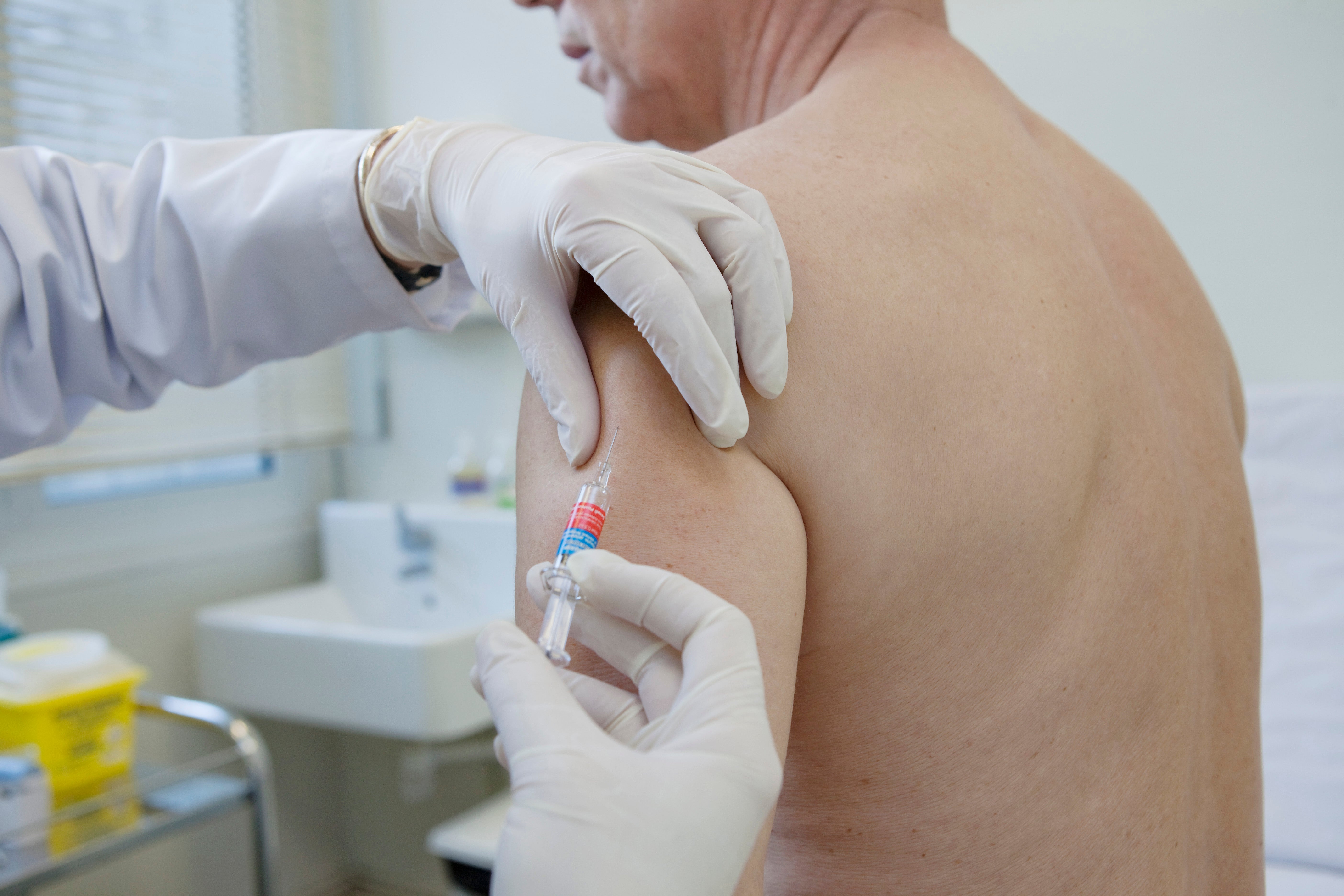 Everyone agrees that a vaccine will be essential to stop the global spread of COVID-19, the disease caused by the novel coronavirus. But Ofer Levy, a physician-scientist at Boston Children’s Hospital, worries that vaccines being designed today are not going to be effective enough for the people who need them most: older adults.

“Whatever we develop, we’ve got to make sure it works in the elderly. Otherwise we don’t have our eye on the ball. And right now, the way vaccines are developed, the eye isn’t on the ball,” says Levy, an infectious disease doctor who directs the Precision Vaccines Program at Boston Children’s. Initial data suggest the virus that causes COVID-19 most severely affects people who are older than 60 and those who have preexisting medical conditions such as diabetes, heart disease or lung disease. A vaccine that protects young people would slow the virus’s spread, but one that protects the most vulnerable will directly save lives, he says.

On the eighth floor of the Harvard Institutes of Medicine building, Levy and his colleagues are aiming to design a vaccine that will work for people of all ages. Their strategy involves testing candidates in a more realistic setting than most laboratories use and adding an adjuvant—a substance that boosts the vaccine’s effectiveness while allowing the minimum possible dosage.

In banks of freezers kept at –80 degrees Fahrenheit, the researchers’ lab has stored hundreds of samples of cells donated by older patients who were treated at the nearby Brigham and Women’s Hospital before the current outbreak. In a neighboring freezer are newly arrived samples of the viral protein that the vaccine will target. Those samples will allow Levy and his collaborators to test vaccine-adjuvant combinations directly on cells from older people. By contrast, most vaccine research instead starts with cells from young mice, grown in blood products from cows.

Dozens of labs around the world are working on vaccine candidates, but it is too early to know which ones will advance far enough to win approval—and that could take at least 12 to 18 months, experts say. Time will tell if any of them will work well on older people, says Seth Berkley, CEO of Gavi, the Vaccine Alliance, a private-public partnership that provides vaccines for nearly half of the world’s children. “The reality is: we need many shots on goal here,” he says.

Levy’s program at Boston Children’s had focused on flu vaccine research, but it began to pivot to coronavirus work on January 1, when David Dowling, a vaccinologist and immunologist in the group, started hearing about a strange outbreak of pneumonia in the Chinese city of Wuhan. When he learned that the virus mainly affected older people, he started to worry. “I said, ‘Everyone’s going to make a big mistake. They’re going to be developing a vaccine that works in a normal, healthy population, and they’re going to miss the elderly. And we’re all going to lose a year,’” Dowling says. He started thinking about how he could look for a vaccine-adjuvant combination for this novel pathogen.

The human immune system, Dowling says, completely transforms during the first weeks after birth and changes dramatically again in old age. So, a vaccine that is effective in healthy adults may not work well at either the beginning or end of life.

For example, pharmaceutical giant GlaxoSmithKline developed a malaria vaccine at a cost of about $2 billion that was shown to protect 30 to 50 percent of adults and about 19 percent of babies, Dowling says. But it seems to provide less protection to infants under the age of six months—who are at the highest risk for dying from malaria. In a 2016 study, Dowling and Levy found that the white blood cells of infants do not mount a strong response to an adjuvant similar to the one in the malaria vaccine, suggesting the need to identify adjuvants with greater activity in early life.

Levy and Dowling are now beginning to develop and test adjuvants combined with various COVID-19 vaccine candidates.  Levy says their “menu” of adjuvants, a portion of which the team had already been testing as part of its flu vaccine work, includes some they buy off the shelf, some that are homegrown (based on screening studies of small molecules supported by the U.S. National Institutes of Health), and some that other academic centers or companies are developing and have asked the group to evaluate.

The team at Boston Children’s is not the only group testing adjuvants. This week, for example, Dynavax Technologies, a biopharmaceutical vaccine developer in Emeryville, Calif., and Clover Biopharmaceuticals, a China-based biotechnology company, entered into a research collaboration to study a vaccine-adjuvant combination against COVID-19. Clover is developing a protein-based coronavirus vaccine candidate called COVID-19 S-Trimer, and Dynavax is providing technical expertise and the company’s adjuvant CpG 1018, according to a joint press release from the companies.

Although Levy and Dowling’s project is still in the planning stage, they aim to test a vast number of possible vaccine-adjuvant pairings in cells from older adults. The plan is to find promising candidate combinations before moving them on to mouse testing, which is generally important for federal approval. There are so many variables involved—which host cell proteins to target, which adjuvants to use, the way the vaccine is formulated, the different populations that need to be addressed—that it would not be feasible to test every possible combination in large clinical trials. Instead evaluating these combinations in a cell culture could accelerate vaccine development and lower its risk, Levy says. The researchers hope to eventually test their candidate vaccine-adjuvant pairs in elderly individuals across the globe to make sure that the finished product will work in as wide a range of people as possible, he adds.

Many other groups—including at least 40 companies around the world—are working on their own COVID-19 vaccines. Cambridge, Mass., biotech company Moderna, supported by the NIH, has developed a candidate using the genetic sequence of the virus, and it is already being tested in the first patients. Moderna’s approach, which is based on protein-making instructions called messenger RNA, or mRNA, has never been employed in an approved vaccine. But before the COVID-19 outbreak, the technology had been tested in about 1,000 healthy people, and it effectively generated an immune response against other diseases, said Tal Zaks, Moderna’s chief medical officer, in an article I published in late January. He added that side effects were minimal and that older people benefited as much as younger ones. “Based on the fundamental immunology and the initial data we have, my expectation is that it will work in older adults as well as it does in younger adults,” Zaks said.

But Dowling is skeptical that such a novel tactic can be used to make the billions of doses that will be needed worldwide. And he is less confident than Zaks that it will protect older, vulnerable people. “We might have a vaccine that works but can’t be scaled or a vaccine that doesn’t work and can be scaled,” Dowling says.

In another approach, Natasa Strbo, a microbiologist and immunologist at the University of Miami, has been collaborating with Heat Biologics in North Carolina, to research a protein called gp96, which triggers both a targeted immune response and a broader, “innate” one—especially in the lungs, gut and reproductive tract. “The proper activation of innate immune responses is what is driving your successful vaccine immune response. There’s no doubt about that,” Strbo says. In a sense, she adds, gp96 acts as both a vaccine and an adjuvant, so it will hopefully work well in those older than 60.

Levy and Dowling admit that other vaccines are further ahead of their efforts, with some already starting human testing. But the researchers think their work will be more efficient in the long run because they will leave the lab with a more effective product. “What is faster,” Levy asks rhetorically, finding a vaccine-adjuvant combination in a lab “or doing 50 complex and expensive clinical studies and finding out later which vaccine worked best for the most vulnerable among us?”

21 Affordable Spring Accessories That Will Make an Outfit

Feeling Cooped Up? Here’s How to Stay Healthy, Sharp and Sane